A FAMILY of five have made history by becoming the first residents to move into a new town in East Lothian which was first mooted more than two decades ago.

The Whyte family have rolled their suitcases up the driveway of their new Bellway property at the new town of Blindwells – between Tranent and Cockenzie and Port Seton – to become the first residents of a community which could eventually boast more than 3,000 homes.

Their four-bedroom home was one of the first houses built there and the family spent three weeks as the only people living in Blindwells before a second home was occupied.

Blindwells, the site of a former opencast mine, has been earmarked for a new town for more than 20 years.

Various planning applications have gone before East Lothian Council over that time, with work currently under way to develop 1,600 homes over a period of eight to 10 years in the first phase of the project – with the possibility of another 1,600 homes to follow in the future.

A total of 144 homes, a mix of three, four and five-bedroom properties, are being built by Bellway, while Persimmon is looking to build 197 more.

Kayleigh Whyte, 29, and her husband Iain, 31, fell in love with the plot of their new property several years ago when searching for a new home near the coast. 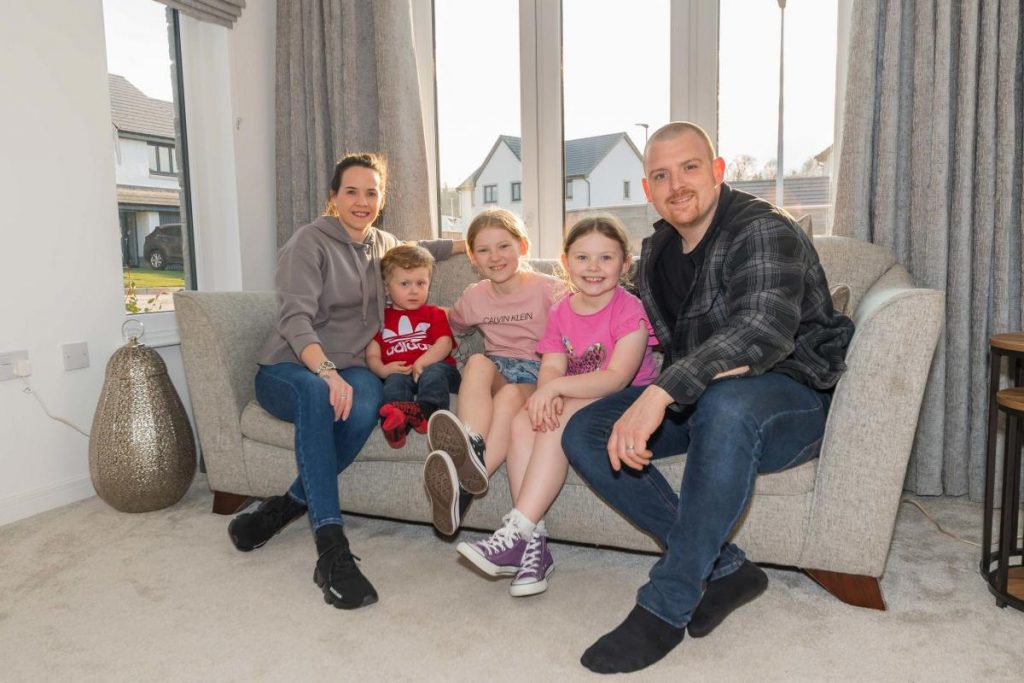 They added that the fixed price and “no bidding war” aspect of buying was very attractive.

The couple, who have been married nearly five years, and children Leah, nine, Grace, seven, and Joshua, three, lived in Port Seton before making the move five minutes down the road.

The family were the first occupants of the site and Kayleigh said that, though it was “lonely and quiet” before their neighbours moved in, her children “loved it”.

Her eldest two children, both pupils at Cockenzie Primary School, enjoy the openness of the site but also like being near their friends. 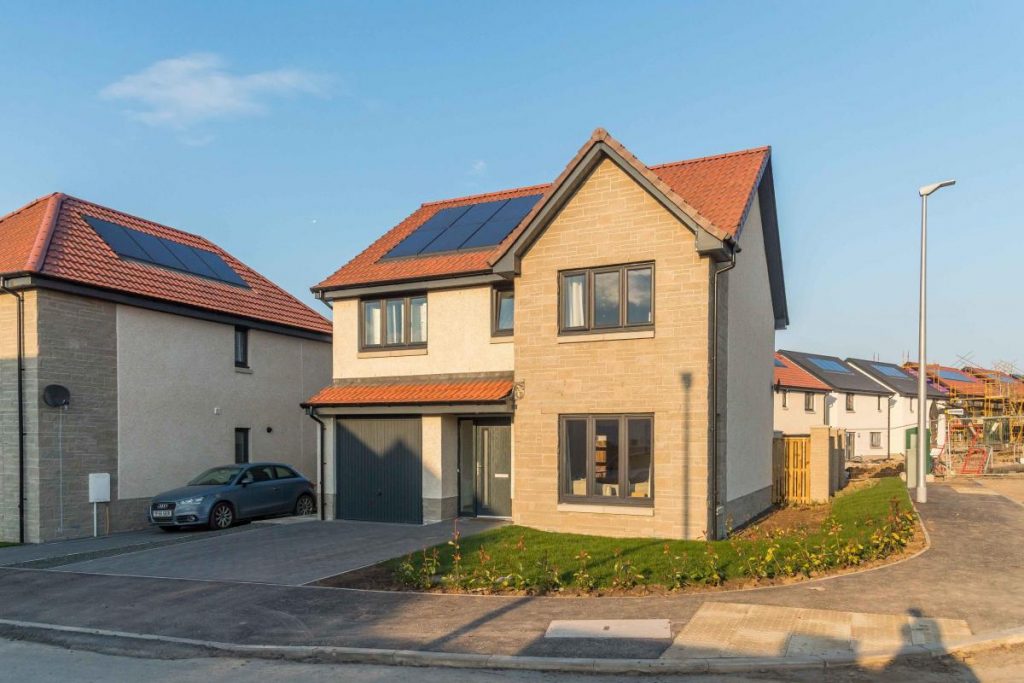 Kayleigh told the Courier: “It was strange being the first on the site and it was quite lonely but there was something quite nice about it.

“We tried really hard to get the kids settled so we weren’t paying much attention to what was outside.

“The kids found it so exciting.”

Blindwells was always an option for the family, with Kayleigh saying: “We were looking to upsize and, with the market being so crazy with ridiculous prices, going for a home at Blindwells was attractive due to the fixed price and no bidding war aspect.

“It was exactly where we wanted to be.”

Kayleigh, originally from Whitecraig, and Iain, from Cockenzie, viewed a four-bedroom home at Bellway’s Shawfair plot so they could see “what the home looked like and they were gorgeous”.

“We looked at other homes but because of the kids we needed something fairly quickly and this was one of the first houses that would be built and the size we needed,” she added.

“The other people have not long moved in, there’s a couple [neighbours] we see often and a few we haven’t met yet.”

She added: “I think this will be a beautiful place to stay.

“There’s going to be wee cafes and such. It will take time, but when it’s all done it will be a beautiful place to stay and, though we were the first to move in when it was basically a building site, I’m looking further down the line and in a few years it will be amazing.”

Though the family are unsure if they will remain at the property forever, Iain, a property manager, said they would be happy to stay “for the foreseeable future”.

He said: “I am absolutely delighted to see the first residents move into Blindwells.

“When I was elected [to East Lothian Council] in 2007, I was appointed the cabinet spokesperson for the environment and was in discussions at that time looking at the possibility of developing the site.

“After 15 years of hard work, problem-solving and brainstorming, we arrive at the position we are in today.

“I look forward to working with others to develop the site, improve transport links and bring prosperity to East Lothian.” 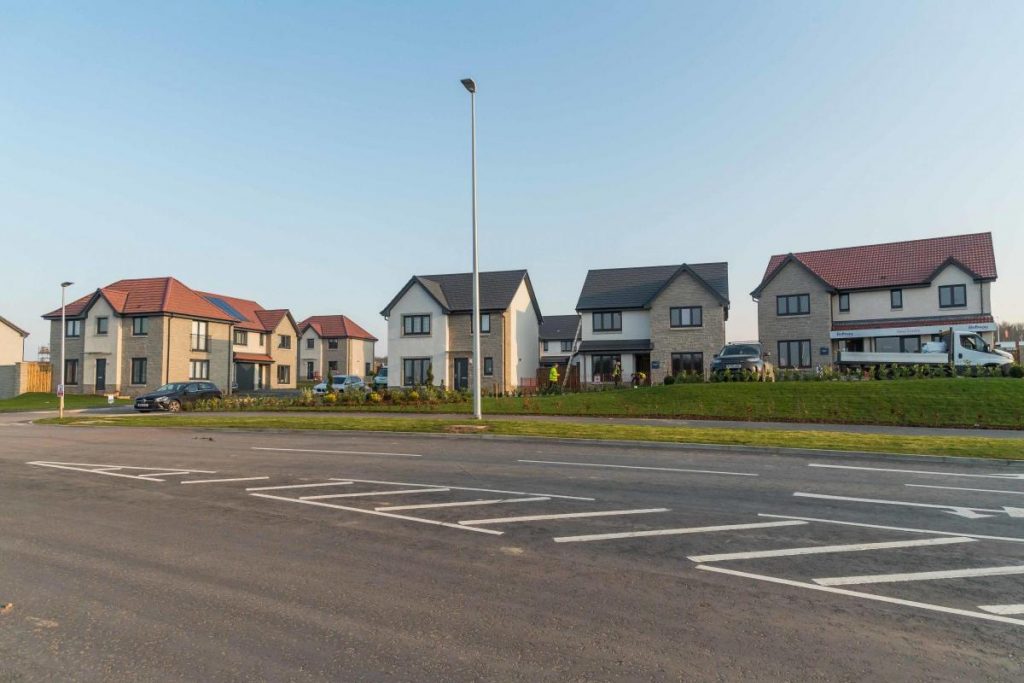 While Kenny MacAskill, East Lothian MP, added: “A new home is always exciting and it must be even more so in a new community.

“It will be these residents and others who will be joining them who will make the town what it will be.

“It’s a great location with easy access to sea and hills, and I wish them well.

“There’s work to be down in providing facilities and forging civic groups but that will come.

“In the interim, good luck.”

“Developers and planners can build a town but it is the people who live and work there who build the community.

“We invite any of the ‘pioneers’ of Blindwells to get in touch and work with us to help shape the future of their town, making it a place where people want to live. Email us at longniddrycommunitycouncil@gmail.com or message us on our Facebook page.”

Provost John McMillan added: “Moving into a new community is a unique opportunity and in doing so the first Blindwells residents are making East Lothian history.

“I hope that everyone who, in the months and years ahead, begins to call Blindwells home will feel part of a vibrant community and help shape its character, whilst feeling happy and settled.

“Planning permission is in place for new homes, employment and commercial premises including shops, community and healthcare facilities, transport and public transport infrastructure. The council also looks forward to the completion of new council homes, with the first 15 homes expected to complete next month, with a further 30 to follow, adding to our available housing stock.

“It is intended that the first phase will also encompass a local centre area to give the new community a heart, with consideration also given to the local environment and open space, to provide opportunities for recreation and tranquillity.

“The creation of Blindwells is hugely significant in terms of helping to increase prosperity, grow the local economy and create a unique sense of place, where residents young and old can live, work and play whilst loving East Lothian.

“We look forward to seeing the new community continue to take shape.”